Zines and Celebrities: The Lost Art of Band Fanfic – by Bianca Sandoval

In the 80’s, when The Cure and Siouxsie Sioux were the peak of cool kid taste, comics and zines appeared created by adoring fans. Celebrity-based comics were nothing new; sorid Hollywood scandals were analyzed and speculated throughout the 30’s and early 40’s. Tijuana bibles drew storylines right from the headlines; movie stars in secret relationships and wild parties were all displayed in pornographic situations.

But that wasn’t all that comics drew inspiration on. The popular Japanese music magazine 8 Beat Gag regularly featured comic strips of musicians like The Cure, Girl School, Bauhaus, and The Damned in the kind of slice-of-life stories you could find in a manga.  If Boy George and Morrissey were roommates, what wacky hijinks would they get into? Would Siouxsie Sioux really win a track meet against the members of Girl School? Well, you better read the next issue! Without the means of the Internet and websites like An Archive of Our Own, fans turned to comics and zines to live out th kind of fantasy life they thought their favorite musicians could lead. 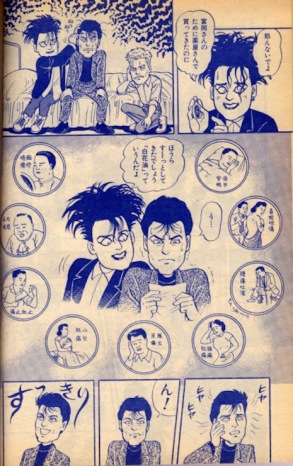 Some of these even made it into the English-speaking world, with Atsuko Shima bringing their art to the UK. But Japan wasn’t the only one in the market of fan comics. In the style of romance comics of the 50s and 60s was the zine Henry and Glenn Forever, a story of Glenn Danzig of The Misfits and Henry Rollins of Black Flag in a relationship as “roommates” with their friendly satanist neighbors, Hall and Oates. Their adventures were serialized and humorous.

Luckily, you can find Henry and Glenn in this day and age. Band comics and fanfic might be more on the blog side, but you can bring on the DIY spirit and start your own! Let Mac DeMarco be a magical princess! Who can say what goes on in his life?