The history of medieval Spain is long and rich, shaped by many different cultures. Some of its rulers, such as King Ferdinand III, embraced this diversity. According to Carlos Fuentes in his book The Buried Mirror, Ferdinand’s “spiritual mission was to recognize Spain’s European singularity as the only nation where Jews, Christians, and Moors intermingled” (Fuentes 73). However, this does not mean that all of Spain’s inhabitants lived together peacefully. In 1492, the Spanish Inquisition began, putting into place policies that “were the basis for expelling the Jews and then for persecuting, supervising, and if need be exterminating the converts” (Fuentes 81). Though it may seem hard to imagine how Spain went from accepting Judaism as part of its society to trying to wipe it out, conflicts between Christians and Jews had been present for a long time, as evidenced in the graphic novel Debating Truth by Nina Caputo and Liz Clarke. The novel is a reimagining of the Barcelona disputation of 1263, a religious debate between representatives of the Christian and Jewish faiths, going over both perspectives. In the story, Friar Paul seeks to make the Rabbi Nahmanides look bad by proving to him using Jewish texts that the messiah has already come. The Christian recounting of this debate shows how little they thought of him, depicting him as immature and inarticulate. This account is not necessarily accurate, but it is important to examine it because it does reflect the viewpoints of some of the medieval Spaniards. In chapter four of Debating Truth, Nahmanides is depicted as childish through his behavior, body language, and dialogue in order to show the disdain Christians in Spain had for Judaism at the time.

Based on the account of the friars, Nahmanides’ conduct is very immature, as he tries to escape from the disputation that he (in their minds) is losing. The graphic novel is based on primary sources that are accounts of what happened at the debate, and excerpts from these sources are featured in text boxes that serve as the narration of the book. In chapter four, this account is from the perspective of some Christian scribe, as evidenced by the narrative’s strong loyalty to Friar Paul. The account also paints the Jewish opponent, the Rabbi Nahmanides, as acting immaturely. In figure 1, he is shown trying to halt the debate, supposedly because “both Jews and Christians were treating him with scorn” (Caputo 62). This description of him makes him seem immature, as he can’t handle any criticism. Even his own people aren’t supporting him, suggesting that his arguments aren’t good, either. This makes him seem inferior to his opponent, who has managed to back him into a corner that he wants to escape from. After he is made to continue, he acts immaturely again by fleeing.

In figure 2, the text claims that “when the lord king was away from the state he secretly fled” because he was “not able to defend his erroneous creed” (62). A mature adult, even if faced with defeat, would do well to see a debate through to the end. Nahmanides’ flight suggests that he is so afraid of being wrong that he avoids it at all costs. However, this does nothing to save his reputation, and only makes him seem more lowly in the eyes of the Christians. Just the words themselves speak volumes about how the scribe looked down on the Rabbi.

The creators of the comic pull from the disputation documents to paint a visual picture of Nahmanides, which is equally if not more important than the written description in the audience’s perception of him. The artstyle used in the comic is important in portraying the man in a way that serves the authors’ purpose. According to Scott McCloud in his book Understanding Comics, having a cartoony artstyle leads to people focusing less on who the person is and more on what they’re saying (McCloud 36-7, fig. 3-4).

If that’s true, then what does the realistic artstyle of Debating Truth indicate? One possibility is that the reader makes stronger judgements about the character, as they seem more distinct and less relatable. Thus, the depiction of the character’s body language is very important; you’re not supposed to relate to Nahmanides, but you are supposed to relate to how the Friar perceives him. The artist of the comic is allowed the liberty of deciding what body language would be fitting given the patronizing view the Christians have of him. He tends to look down a lot, as though in shame, as seen in figures 5 and 6 (Caputo 58-9). 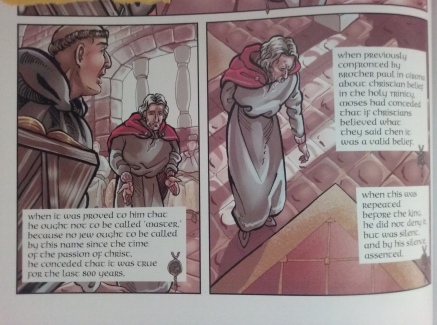 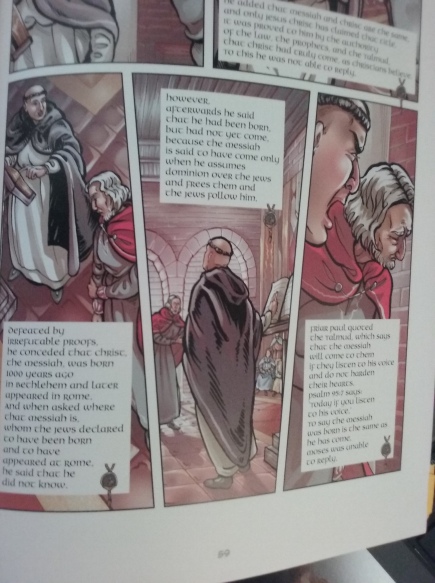 By looking down and slouching, he is putting himself in a lower position than Friar Paul, both literally and symbolically. This makes him seem smaller and more child-like, which makes the audience less likely to take his arguments seriously. The fact that he looks ashamed makes it seem as though he is being reprimanded by the Friar, who is thus made to seem more knowledgeable. These visual depictions of Nahmanides are symbolic of the Christians’ disdain for him and their desire to make him look ignorant.

Nahmanides’ dialogue in this section serves to complement the visual descriptions of him as inarticulate, and thus unable to create mature, valuable arguments. In contrast to narration, which is placed in a text box and understood to be a description of what is happening, dialogue is usually placed in word bubbles and is understood to be verbatim.

Though it may not seem important, putting something in a speech bubble can greatly change the way its perceived. Figure 7 is an example of how a word balloon can change the way text is perceived, in this case resulting in a negative perception of Nahmanides. The word bubble takes up very little space, and only says the word “no” (Caputo 59). 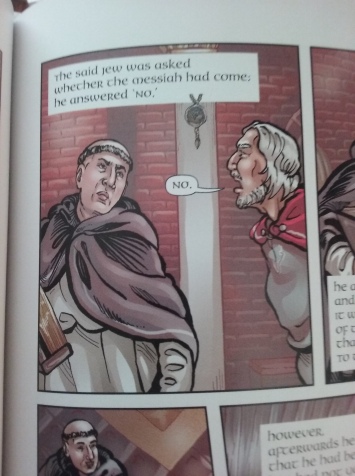 Though the narration box already claimed that that was Nahmanides’ answer to the question he was being asked, it could have just been interpreted as a simplification of his answer, which might have been longer and more elaborate. However, by inserting it into a word bubble, it suggests that it is an actual quote. This makes Nahmanides seem childish in that he is only giving one word answers and not developing his arguments at all. He is just repeating his beliefs without thinking about them. His side of the debate loses its value, making the reader see him as not worth listening to, since he can’t even back up his own arguments, and is eventually forced to concede to the points made by Friar Paul. In this way, he is made a child in the eyes of the audience, which only serves to discredit him.

Caputo and Clarke utilize many different tools in their quest to represent different viewpoints. By taking advantage of text boxes, speech bubbles, and visual representations of body language, they are able to use the engine of graphic storytelling to portray the conflicts that were playing out in medieval Spain between religious groups. In this section of the book, they show how little some Christians thought of Jewish people by illustrating how Nahmanides was depicted as childlike in the eyes of the scribe for the debate. However, there are a few important things to keep in mind when examining this story. First of all, this is just one account, and though it may hold some sort of truth, it is not the full story. It may not even represent the views of all Christians in Spain, but rather just those who wrote down the account. More could be written about the rest of the book, which focuses on Nahmanides’ version of the events. Even then, not all perspectives would be represented. However, as is, this graphic novel manages to capture part of the complexity of the conflict between Jewish and Christian people in medieval Spain that led to tragedies such as the Inquisition. Examining conflicts like these is necessary to understanding and appreciating the history of Spain.