Hellboy on High: Shadow, Color, Abstraction, and Kinesis in Hellboy – by Tyler Crissman

Shadows are awfully inconvenient when you’re trying to read a book—unless they’re a part of the book, in which case, are you reading Hellboy? If not, you should try it. Mike Mignola’s use of shadows in this paranormal adventure series is fantastic, dramatic, vibrant, and smart (seriously, try swathing a drawing in darkness while also keeping it decipherable and beautiful). That, in combination with the coloring, makes for something worth reading and re-reading. I’m sure there’s plenty to be said on the visuals in Hellboy, but I want to focus on how those shadows and colors affect the sense of motion, using as a case study a few pages from Hellboy: Wake the Devil (the second volume in the series of trade paperback volumes, with James Sinclair as the colorist).

First, what kind of shadows and colors are we talking about? The shadows often adorn and even engulf the background and objects, but also find a comfortable home on characters. Hellboy himself is often heavily shadowed, stark black striking an excellent contrast with his bright red skin. (See the first page of the excerpt for some gorgeous examples of this.) Speaking of which, the coloring is also very striking. Hellboy’s red tends to stand out, and subtler tones imbue gloomy environments with an appropriate character while also complementing the jet-black shadows. Also of note is the use of both gradients and flat tones. Gradients can help to add a sense of three-dimensionality, especially when the flat tones of black shadows tend towards the two-dimensional. Meanwhile, flat tones help create a heightened two-dimensionality.

So, how does this play into the sense of motion in Hellboy? Well, this is all subjective, but I find that heavy shadowing, especially paired with flat colors, makes for a more abstract image. (I would argue, though, regarding flat tones versus gradients, that abstract backgrounds aren’t necessarily made more abstract with flat tones, so that would be an exception.) It’s still a narrative image, but, I think, it becomes less literal. These coloring and shadowing techniques and their resulting dimensionality vary without any diegetic reason—the reader isn’t expected to think that Hellboy is becoming more flat because of anything actually being done to him. In this sense, it’s a figurative artistic choice rather than a literal one, done for the change in impact on the reader rather than any change in the reality of the story. This, I think, contributes to these kinds of flatter images in Hellboy taking on a different physical feel. Rather than being a representation of, say, Hellboy crashing through some bricks, an image like that is a representation of the feeling and the idea of Hellboy crashing through some bricks. Throw all the laws of physics out the window, more than you usually would in a story about supernatural beings duking it out. Instead, embrace the thrilling kinesis of a painting.

This brings me to what I think is the other major element playing into the particular physical feel of the flatter images: two-dimensionality itself. It’s not just that they’re abstract, but that they’re abstract and distinctly flat. Since we live in a three-dimensional world, we tend to think in three dimensions. (Okay, I’m not a psychologist or any other relevant professional, but hear me out.) Sure, you can validly argue that the images our brains receive—in the world just as much as in comics—are two-dimensional. Still, though, we interpret them with three-dimensionality in mind. Otherwise, we would assume that everything is on the same plane, such that characters are imbedded in backgrounds, and the moon isn’t far away, just small. The standard assumption is that, when something is depicted as moving and existing, it has a full three-dimensional form, not just the flat image that we see. When an image in Hellboy is particularly flat, it takes advantage of the three-dimensional assumption, in tandem with the static nature of the comics medium. Hellboy was never moving in the first place, just existing as unmoving ink on a page. When our illusion of his three-dimensionality is broken, so too is our illusion of his movement, and he becomes a static image. This may not happen completely, given that a reader is probably in a narrative frame of mind—but I would suggest that the stillness of flatness does at least distort the sense of physics. Things hang in the air, to dramatic, unrealistic, and beautiful effect. Since there’s a lot of airborne-ness in this excerpt from Wake the Devil, it should illustrate this well.

Look at Hellboy’s leap at the bottom of this page (the one following the page above). Hellboy has some gradients on him as well as some heavy shadows. A good deal of his body is consumed by shadow, but the gradients add depth. It’s easy to glance over him and quickly get the full literal, narrative sense of him. The leap is stylized for sure, but I don’t think it has the full physics-bending impact of increased abstraction. 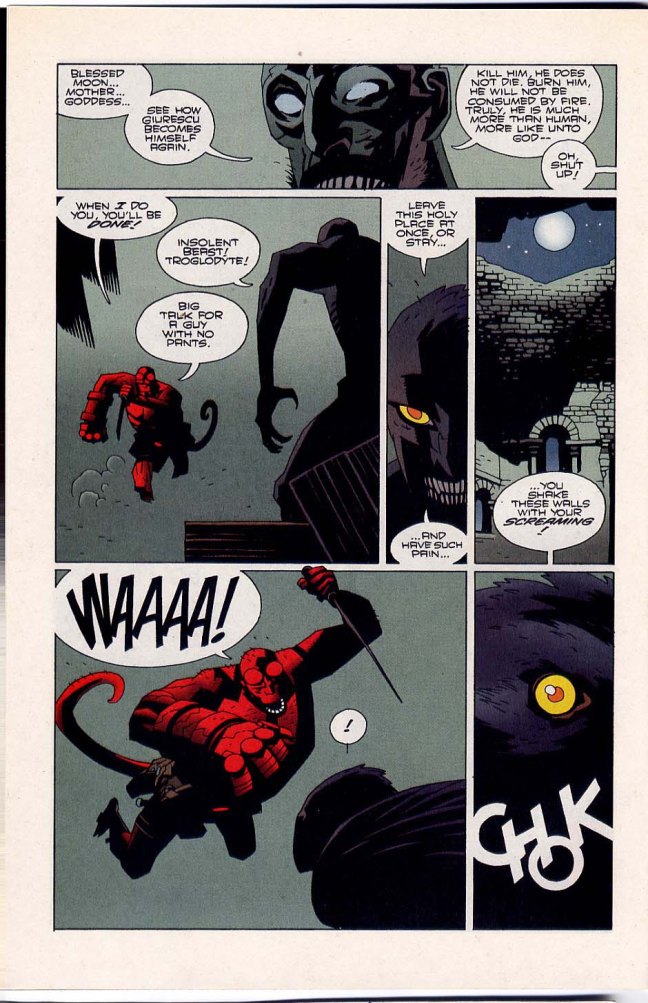 On the next page, Hellboy is still in a pretty literal state. The shadows and coloring are beautiful, and Hellboy does hang in the air, but it doesn’t differ significantly from the previous page’s kinesis. Perhaps Hellboy’s avian opponent actually is the more abstract one here. Although the main body and beak are all clearly literally delineated, the large swaths of black elsewhere add a level of abstraction, especially with the spurt of blood from Hellboy’s attack.

The three-dimensionality of the dagger, the wound, and the rest of the bird-body is implied, but the visibility of the blood clashes with the obfuscation of the body. I’m not an expert regarding light sources and shadow physics, but I don’t think that contrast is possible. On top of that, is looks odd to have the spurt’s implied three-dimensionality imposed on a flat, shadowed area like the one here. Because of the way the shadow obscures the actual shape of the bird body, the blood can seem to come out of nowhere, becoming not a narrative blood spurt but an abstract flair of red. The second panel doesn’t have the oddity of that stabbing, but it does still feature abstraction in the bird (or, rather, bird-form of a vampire, but “bird” is shorter), and the blood.

Finally, Hellboy gets some time to abstractly shine. The following page features the aforementioned bird-vampire in an abstracted way again, both in bird and humanoid forms in the first and second panels respectively.

There isn’t much new to say about the first panel; there’s a bird silhouette and a shadowed-but-literal Hellboy. Panel two, meanwhile, hangs up a nicely abstracted vampire by the moon before letting him drop. Blood drops have become black dots that float more so than flow like blood, and as a particularly flat shape, the descending body takes on a more abstract kinesis. Panels three and four feature a red-and-black shape suspended in the air. The heavy shadowing on Hellboy does well to imply his three-dimensionality, but it’s very stylized and planar. Moreover, when it gets down to it, in these panels Hellboy is just some black shapes and some red shapes, looking cool and dynamic—something that is not terribly subject to typical physics. Rather, it’s subject to the static-ness of a painting, mitigated by the narrative and sequentiality of the comic, resulting in Hellboy hanging in the air for second before the flow resumes. The fifth panel brings back more gradients and literalness, but I can’t help but read it as somehow almost as abstract as the previous panel’s Hellboy. Maybe it’s the bits of stone hanging in the air by Hellboy; maybe it’s the heavy shadowing; maybe it’s simply the only slight presence of gradients; maybe it’s the way that some shadows are mingled with color, like the way color outlines his shadowed legs; maybe I’m full of nonsense and have been this whole time.

Anyway, on the following page, there’s one panel I’d like to point out, and that’s the second panel. Hellboy has some gradients on him, but he’s mostly a composition of colored shapes. Moreover, though, he’s falling through a background of sheer black, broken only by a quadrangle of blue gradient above him and some green shapes below. Well, there’s also the speech balloons, to be fair.

The point is, though, that this implied space is heavily abstracted, and Hellboy is pretty abstracted himself. There is very little sense of the space he falls through. In fact, in the next panel, there is little indication of the impact of his landing. The physics of his fall is very much distorted. For one thing, it’s hard to tell much about the chamber Hellboy falls into. The long stretch of blackness seems to imply a long fall through darkness, but little beyond that. Again, it’s very subjective, but my impression of the motion of the panel is that Hellboy seems to hang there, and then truly fall.

This is just a small sample of Hellboy. I’d highly recommend reading more, and then re-reading with a keen eye for excellent use of shadow, color, and seemingly simple shapes to great effect.