The lich, a cadaverous sorcerer whose bones cohere through arcane magicks, commands hordes of fellow undead—an uncanny specter of doom. He also suffers from depression. Or maybe that’s just Steve. Yeah, a lich named Steve—and I’m not making this up. There’s a comic by the name of Steve Lichman by Dave Rapoza and Dan Warren (who collectively form Acceptable Comics). Steve Lichman combines many elements I find hard to resist—the comedic meshing of fantasy and the mundane, impressive art with excellent coloring, and skeletons. It felt almost magical to find it; I chanced to see a post a while back on the Fantasy Fiction Podcast subreddit that had a link to a comic that fell pretty well in line with the comedic aesthetics of the aforementioned podcast. And I was greeted with this:

I was into it—and there was more, so (as if you couldn’t guess) I read on. Basically, the titular Steve Lichman lives in a dungeon with his monster friends, and while they do have fantasy-genre sorts of things going on in their lives, they also deal with the kinds of problems that a lot of people experience when living in that thing you might (oversimplifyingly) call “modern society”. A lich, a vampire, a mind flayer, and a bunch more dungeon dwellers face social awkwardness, emotional struggles, and more. (This video for the second volume’s Kickstarter sums it up pretty well—Volume 2 has yet to release as I write this, however.) Soon enough, I found out that there was a Kickstarter campaign going for a full-on book of Steve Lichman (Volume 1). So, hey, why not back that? And eventually, I got my hands on a beautiful book. Seriously, this isn’t a terribly relevant point here, but oh man did Steve Lichman hit the spot for physical format. A nice hardcover with gold foiling that you could just sneak right next to some hoity-toity Shakespeare anthology or a legitimately old book. Pictures aren’t the same as holding the thing, but take a look: 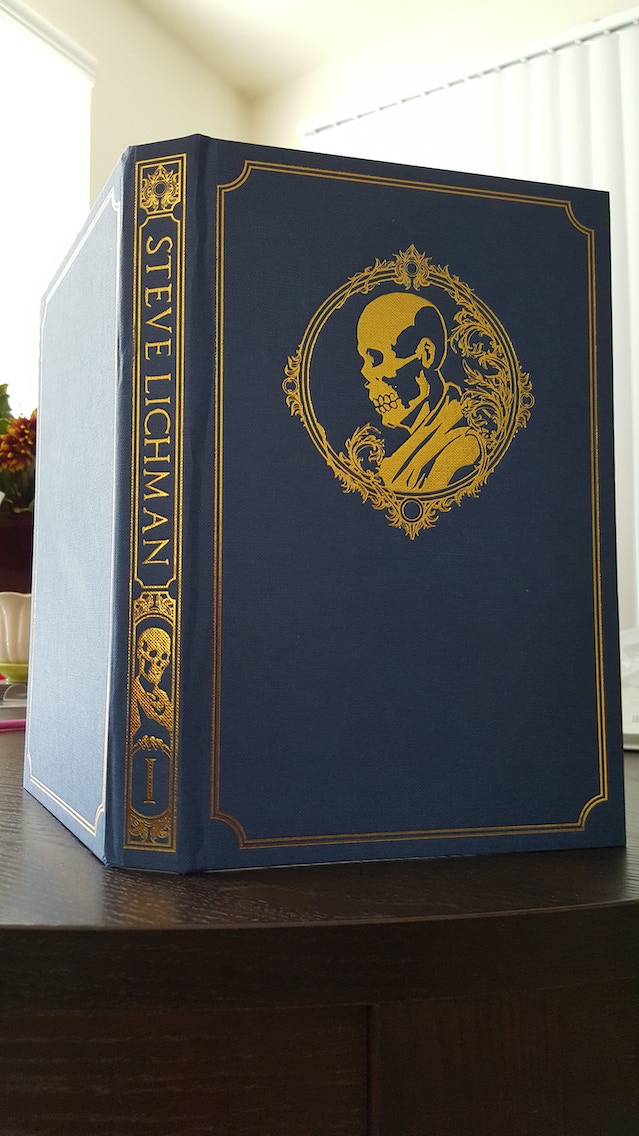 Okay. So, what’s inside the book? Kind of a lot is going on in there: the fantasy elements mixed with mundanity and real-life problems, the humor, and all that I’ve already revealed is there, for sure. But there’s another element, something that was there in the online preview I’d seen, but that becomes all the more prominent in the full narrative of the book. The book, I think, is hard to put down, but also pretty consistently maintains a sense of discomfort. But where is that feeling coming from? The undead/demonic/monstrous figures populating the book are a source of comfort more than anything. They help add humorous juxtaposition and fun in both form and function, and they’re just darn nice to look at.

No, the discomfort definitely comes from the human aspects of the book. That is, for all the relatability and humor of the experiences and personalities Steve and his dungeon neighbors display, they also enter some pretty unsettling territory that is just as real. One minute you might see Steve and Flay (the mind flayer) quibbling over video game pre-order bonuses, but the next you might Dracula going out with a minor; or, while it’s humorous to see Ben the beholder and Mandusa the male Medusa have a stoned conversation, it’s disturbing to see peer pressure and psychopathy turn a problematic friend group into a hive of hurt. On the most basic level, this is disturbing because of both the simply unsettling nature of hurtful behavior and the possibility of seeing and embodying such behavior in life.

The immediacy of the “normal” problems and conflicts in Steve Lichman really brings home the “this could be or happen to you” element. There’s also the simple symbolic resonance of people being the real monsters—and of every perceived monster being a person rather than a simple bogeyman. I don’t claim to be some kind of analytical wizard, but it wouldn’t be very insightful to stop there (even if it might be merciful and tactful to write a shorter article…. Sorry about that.)

What I’ve come to realize about the disturbing human flaws in Steve Lichman is that they seem to orbit around masculinity as it’s constructed by the dominant culture. Looking at the cast of the comic, that makes sense. There’s a profound lack of female characters—the few who do appear are in minor roles. I don’t know Rapoza’s nor Warren’s intentions, so this isn’t a matter of critiquing them—nor is it a claim that they designed Steve Lichman to make a reader consider problematic notions of masculinity. (I would hope for the latter, but my best guess is that the truth is somewhere in between not considering female characters and critiquing masculinity culture.) However, I do think that Steve Lichman was made with the dark side of the dominant culture in mind to some degree. Regardless of intentionality, though, the heavy male presence in the cast is representative of a lot of fantasy-genre material. I can’t claim to have a doctoral knowledge of fantasy, but both heroic adventurers and denizens of the deep tend to be male in mainstream fantasy media, and the general cultural impression thereof. And what do they all do? Well, mostly it seems that they do a bunch of fighting. (Can I clear up that I’m not being dismissive of the fantasy genre? There’s a lot of valuable fantasy material out there that isn’t just buff-man-fights-dragon; by no means am I anti-fantasy. We good? Good. Back to it.) Fittingly, then, Steve and crew live in a world full of male characters where violence is often not far off. You can imagine how that might be a problematic place to live in, and one that breeds problems in its inhabitants.

When it comes to the more overt, fantasy-battle kind of violence, the characters have an odd relationship with violence. At times, battles are feared and lead to death that horrifies; at times, battles are welcomed as a path to accepted death; and at times, battles are a source of entertainment—except for the tragedy of death. (The figuring of battle as entertainment is most prominently exemplified in the Volume 2 preview pages. It doesn’t feature as prominently in Volume 1, but it’s still relevant.) That range of relationships to violence means that what is conventionally “the point” of the monsters’ lives and the adventurers’ quests is also a source of very ambivalent feelings. This calls the validity of that “point” into question. It might seem fine when romanticized, but in practice, it’s—at most—only fine for whoever ends up on top. In other words, it’s a model of life in which people have to be hurt. Seeking battle is a way to try to “win” in that system, and accepting death by battle is a way to try to escape the horror of it. Both approaches take that system for granted. But in the world of Steve Lichman, it not only shouldn’t be that way (you know, because people die) but it also doesn’t have to be that way.

Although perhaps only intended as a joke, the role-playing-game aspects of the battles (people roll dice, even) kind of imply that these battles are ultimately just games. There are some complicating aspects, so I don’t think the game-like aspects of the fights form a one-to-one symbol of violence being unnecessary. However, it is odd that people seem to feel obligated to live and die by those rules. Looking at it through a lens of masculinity culture, it seems like a pretty good analogue for the unnecessary and rule-bound way that supposed masculinity hurts people. There isn’t much rhyme or reason to the unofficial codes that lead many men to be aggressive. It’s almost like a violent game that some men seem to have decided to somehow “win”.

Notably, also, Steve Lichman makes it apparent that there are other ways to live. For example, Dracula (for all his severe problems) parties with humans, and in the Volume 2 preview, the two sides of the fantasy fight actually talk to one another in a genuinely friendly way as though they were just playing a game. Everyone could just be having fun, instead of suffering through a violent framework of “masculinity”.

It’s not just the battles, either. The slighting of friends and other such emotional violence carries the essence of the dominant culture’s “masculinity” like an over-applied cologne. People try to be impress one another with claims of sexual “conquest”, displays of “toughness”, and rejection of “nerdy” things. But those behaviors are all depicted as outer shells.

Deep down, everyone wants acceptance and friends. And even when a particular character might not be into “nerdy” things, that element plays an interesting thematic role in a fantasy-genre comic. Every character is a part of a fantasy world, and fantasy has certain “nerdy” connotations, but also a tendency to feature both a preponderance of male characters and a host of hyper-masculine characters (think Conan the Barbarian). The fact that characters are trying to reject the “nerdy” and be “masculine” in a genre that is coded as “nerdy” and emphasizes “masculinity” is starting to get more confusingly circular the more I think about it. But in any case, it could very well be read as a “meta” commentary on how those characters are rejecting themselves and trying to be something else—a something that, incidentally, is a fantasy in a different sense.

So… In short, Steve Lichman is disturbing in its characters’ enactment of the dominant culture’s conception of masculinity, but in a good way. I don’t know to what degree it might be a conscious critique, but at the very least, it’s indicative of a harmful zeitgeist. The comic executes that effect with humor and great aesthetics too, so it’s a more captivating read than, say, a blog article that rambles on and on. Maybe reading Steve is a good form of meditation on both gender issues and the potential for art to make headway on those issues. Anyway, if you’re interested in reading the comic, there’s a set of preview comics to read that includes the original web versions, and a set of the same thing but with redone text for the older comics. (The original versions feature less-than-perfect handwritten text.) You can also pre-order Volume 2 and/or a reprint of Volume 1 online. (It almost feels wrong to practically advertise something, but I’d be remiss to not provide a roadmap to getting a hold of Steve Lichman.) And don’t worry about “being a man”. What really matters is that we’re all skeletons inside.