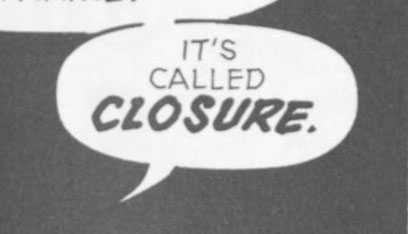 Close Reading: “All You Need is Love” – by Lauren Bryant

In 2006, twin comics creators Fábio Moon and Gabriel Bá released a collection of stories about life in urban Brazil called De: Tales. Whether the stories are collaborative or made by one of the brothers, all are excellent in form from both a literary or artistic standpoint. One story created by Moon, titled “All You Need is Love,” is an especially interesting example of how attention to panel composition can play a crucial role in the effectiveness of a comic. The tale is about a young man leaving after a one night stand. Though the story is only three pages long, it manages to pack meaning into every panel. For example, Moon manages to convey and reinforce the theme of emotional detachment by utilizing the space within each panel. In “All You Need is Love,” Moon evokes a sense of emotional distance between the characters through their positioning in the panels in relation to each other and the reader.

Moon consistently places the two characters in opposite corners of the panels, creating the feeling that the male character is distancing himself from his one-time lover. In the first panel, the audience is greeted by a woman reclining naked on a bed and a man sitting on the edge of the bed, putting on his shirt (Moon, 64) (figure 1).

The first basic division between them is that they are positioned in opposite corners, with the woman in the bottom left corner and the man in the top right corner. They are as far apart as they can be within the frame of the panel without denying the reader necessary information about who is present in the scene. Right off the bat, this provokes a sense of tension and detachment between them, with the man presented as being as removed from her as possible without being out of the panel. This pattern continues in the following panels on pages 64 and 65. In the top left panel on page 65, the characters are seated on opposite corners of the mattress, with the man hanging mostly off the edge (figure 2).

Not only is this continuing the pattern of positioning them as far away as possible from each other, but it also creates an artificial panel contained within the mattress, which the man is poised to leave. This creates the illusion of him almost straining to escape the panel, putting even more distance between them. This growing physical distance is representative of his growing emotional distance from the girl, as he prepares to leave her forever. In the last panel where the characters are seen together, this effect is accentuated by the placement of a wall between them (Moon, 65). Not only are they on opposite sides of the panel, but they are almost now in separate panels, with an artificial border created by the wall. In this way, Moon accentuates the disconnect that the characters have between them, and concludes their interaction by physically and emotionally cutting them off from each other.

The characters’ postures create imaginary lines that serve to further divide the panel, and by extension the characters. In his book Understanding Comics, Scott McCloud presents the idea of closure, which is the process of “observing the parts but perceiving the whole” (McCloud, 63) (figure 3).

This often refers to things like concluding that a part of an object that isn’t visible is indeed there, but it can also refer to a “shape or outline […] [triggering] closure,” making us see something that is not literally present (McCloud, 64) (figure 4). McCloud’s example of this on page 64 uses coins that look like Mickey Mouse’s head. Though they are in reality just coins, the viewer’s brain connects the different parts to create a familiar image. A similar effect is achieved by Moon using the lines created by the characters’ posture. In the first panel, the slope of the woman’s leg and the angle of the outstretched arm of the man draw an imaginary line between the two characters (Moon, 64).

Another example of this is on page 65, where the slope of the man’s back and the angle of the woman’s knee create a similar border. This happens when the reader’s mind fills in the imaginary edges created by their positioning, thus seeing the boundaries that separate them. It is important to note that the characters do not together create the same line: instead, they form two parallel lines with quite a bit of space between them. This shows that not only is there a border between them, but there is quite a disconnect. There is no unity in their positions, despite the similar angles they create. Each person occupies their own space, maintaining their distance physically and emotionally.

Moon also puts physical distance between the reader and the characters, transferring the detached feeling from the characters to us. In the final panel, we see the man from a bird’s eye view (Moon, 66) (figure 5). The text presents a sort of blue, melancholy tone, saying the character “miss[ed] his ‘boyfriend-in-love’ days” and that he “spent the rest of the day thinking about love-everything.” These lines express the regretful, wistful thoughts of the character, encouraging the audience to sympathize with him. But instead of pairing this with an intimate view of the character, allowing us to further read these very human emotions, Moon provides a far away viewpoint, as if to deny us the ability to sympathize with the man. He detaches the reader from the character in the same way the character himself detaches himself from the girl, by creating as much distance between the two subjects as the composition will allow. 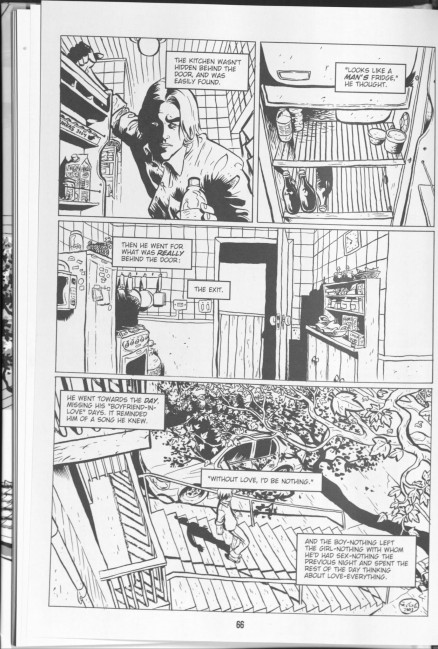 The emotional detachment created by avoiding close-ups of faces is used throughout to hinder the audience’s attachment to the characters, and thus make our experience mirror that of the main character. In almost every panel that he’s in, the male character doesn’t directly face the reader. His back is facing us, he is looking down or to the side, or we are simply at an angle where we cannot easily see his face. By avoiding giving us a good look at his face, we are denied a connection with him, much in the same way he denies the girl a connection by avoiding looking directly at her. By turning his back to her, he is turning his back from us, doing his best to emotionally separate himself. There are a few exceptions to this pattern, however. On the last panel on page 64 and the first on page 66, we get to clearly see the man’s face. One might argue that this intimate, close-up view of the character erases that distance that is present throughout the rest of the story. However, where the picture closes distance, the text creates it again. On page 64, the narrator says the man “just couldn’t be there anymore” as he looks back at the girl. It is clear the man doesn’t want this physical closeness with the woman, and is instead raring to go, fueled by the emotional distance he feels. This shows that while there may be a lapse in environmental distance, the emotional distance is still present. This distance through text is carried out in a different way on page 66. In the top left panel, the man looks into the fridge, accompanied by the text “the kitchen wasn’t hidden behind the door, and was easily found” (66). This is a very literal description of the character’s actions, without addressing or acknowledging any feeling we might see on the man’s face. This serves to withhold the emotion felt by the character, and thus maintain that distance we feel between us and him.

By the end of the story, Moon has managed to create and retain distance, both physical and emotional, between the woman, man, and the reader. He positions the characters in such a way as to maximize distance between them and to create subtle divisions separating them. He restricts the reader’s ability to read the characters’ emotions by creating physical distance between us and them and avoiding clear views of the face. When these restrictions are relaxed, Moon makes up for the lack in physical distance by creating distance with the accompanying text. In this way, he manages to properly portray and mimic the disconnect between people who are together for the night and gone by morning.