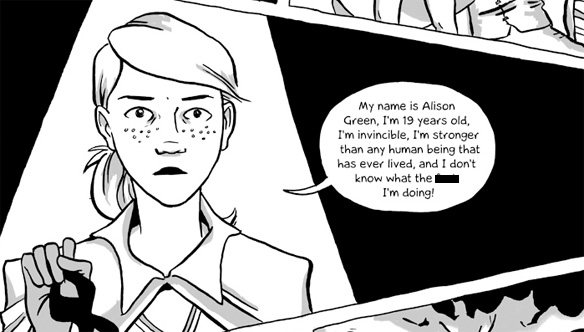 Strong Female Protagonist is an ongoing webcomic since 2012. The love child of writer Brennan Lee Mulligan and artist Molly Ostertag, which focuses as a critique of the modern superhero genre. The protagonist is a former teenage superheroine “Mega-Girl” now going only as Allison Greene: an unassuming college student.

I personally don’t focus so much on the art quality. That being said, the art feels unpolished in the early days of the comic; with notable improvement of art quality, and the inclusion of color with later entries. I also find that the webcomic has a similar art style to Lucy Knisley’s French Milk, 2008.

Allison Greene, the protagonist, shows the reader where the superhero genre can go conceptually, and narratively. She is an embodiment of the social-justice seeking college student, and sees her actions in high-school as those of an idealized superhero. Throughout the series, Allison has to come to terms with her actions, the ones that she didn’t consider while perpetually fighting super-villains; the realization that she never actually solved any long-term world problems in her career as a super-hero. 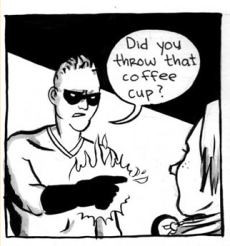 One of the more important and saddening moments in the comic happens when Allison is talking to her professor who has vendetta against her. S.F.P has a diverse cast of well fleshed-out characters, who struggle with a variety of relatable issues. Their backstories are explored in the quieter moments of the story. She realizes what she has done to her professor in the past, her actions as “Mega-Girl” being a profoundly negative impact on his life. The webcomic critiques the concept of the modern superhero and many real world issues — for instance, the idea that  superheroes are doing more harm than good. It also discusses issues such as: bigotry, wealth distribution, healthcare, and LGBTQIA issues.

Strong Female Protagonist gives us a character that actively questions the status of the modern superhero, and its real world consequences. I find this comic incredibly insightful, with Allison Greene representing the rare self-aware superhero. And her wondering if a world full of superheroes, isn’t possibly the best world.