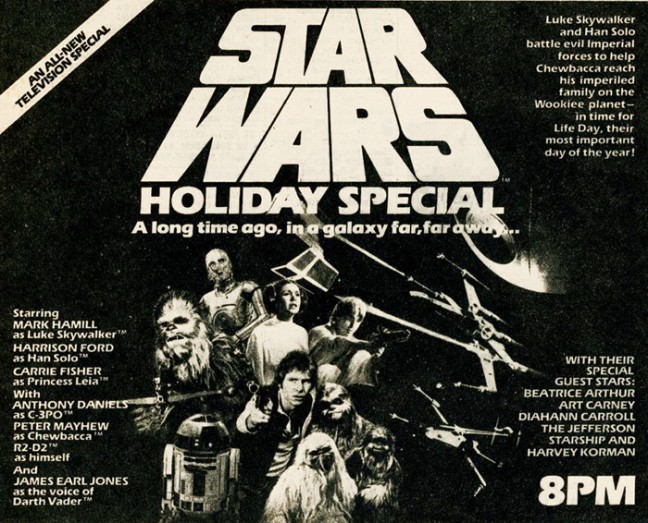 The Star Wars Holiday Special was originally aired on November 17, 1978 to an unsuspecting international audience. It was considered such a colossal failure that it has never officially aired again on american television since. Even George Lucas himself stated in one interview, that he would destroy every remaining copy of the special if given the chance. So finding the entire special on YouTube — I began to watch it, already uneasy with what was to come.

I should have been outright terrified. The special is an hour and a half of my life that I can’t purge from my memory. The entire special is staged like a variety show, except nothing is funny, not even in an ironic sense. From what I could understand, the plot of the special boils down to Chewbacca (played by Peter Mayhew) returning to his family on planet Kashyyyk (Cash-eeek)  to reunite with his family for Life Day; the wookiee equivalent of Christmas. Pesky Imperial Forces impede Chewbacca and Han Solo’s journey. The whole special is staged around Chewbacca’s family in their massive treehouse home. The only highlight of the show is the cartoon segments featuring Boba Fett and Han Solo’s nightmare inducing cartoon face.

Over half of the special is basically a bunch of hairy, roaring mimes–Chewbacca and family. The remainder can be summarized as the reanimated corpse of Harvey Korman attempting to be humorous in  horribly written comedic sketches. One of the most offensive of which consisting of him in blackface and drag as an alien Julia Child. Musical guests often interrupt any semblance of pacing to fill air-time with music videos, with the highlight being Jefferson Starship. The main cast from Star Wars is there: Harrison Ford, Mark Hamill, and Anthony Daniels for example. Sadly the cast as a whole give lackluster performance — with approximately ten minutes of screen time each. The producers should’ve titled the special,  Chewbacca & Family: featuring Too Many Unnecessary Guest Appearances.

If you want to have a good laugh with your friends, then watch the special. You’ll have the image of a badly spray-tanned Mark Hamill burnt into your brain for the rest of your life. If you truly love Star Wars and everything it stands for, stay away. Go wait in line for The Force Awakens instead. Please, don’t let Chewbacca’s weird family holiday ruin your Life day…err…Holiday.